I've read a lot recently about the environmental effects of the production of our food, in particular meat. I thought this might be as good a time as any to mention the subject, it being Ramadan. This is a month we can dedicate to our conscience and a time when fasting should give us a more frugal attitude towards food.
The global consumption of meat has become a topic of concern among environmentalists and is something for us to think about here in Oman, which is a population of fervent meat-eaters. This will be brought further into context soon with Eid al-Adha on its way (the defining feature of this holiday being the slaughter of animals). Even on regular days red meat, which once would have been considered a luxury, and still is in many parts of the globe, is eaten frequently. For many families it would be considered bad hospitality not to serve such an excessive amount of meat to guests that they would barely be able to make an impression in it (forgive me for generalising, I'm sure its not universally the case).
Besides the well-known health risks of consuming too much read meat, there are some really startling environmental factors. Meat production requires vast amounts of water and grain and the animals' waste is pollutant (cow manure emits methane and nitrous oxide). For the grain alone,huge areas of the world's rain forests have had to be destroyed. The production of beef produces 24 times the amount of greenhouse gases as vegetables. Apparently, 12,000 gallons of water is required to produce one pound of beef, compared with 60 for the same weight in potatoes. And its not just industrial-sized confined factories; free-range meat has the same requirements but also needs substantial amounts of space.
I may seem like some ranting vegetarian but I'm not, I just believe in valuing moderation, not excess. The world's population is bursting along with its consumption, and a little moderation would definitely go a long way. I think the shocking stats are a deterrent enough (although if that doesn't do it the talk about methane certainly does). 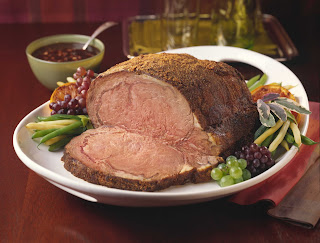