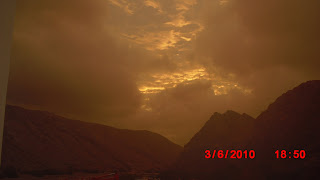 Cyclone Phet, which has hit the North East coast of Oman is so far only affecting Muscat in the form of heavy rain. It is predicted to get closer by tonight but thankfully for now conditions are comparitively mild. If it wasn't for the humidity I could almost imagine I'm in England.
I have been really impressed with the response of officials; the cyclone has been a constant topic on both of the Oman TV channels, with advice being given in Arabic, English and Urdu to make sure everyone is prepared. Residents on Masirah Island, off the East coast, were flown off from Wednesday and an official day off has been declared by HM the Sultan on Saturday.
The supermarket was an amusing experience on Wednesday, it looked like a cyclone had hit from the inside! At least everyone appears to have made sure they're stocked up with supplies. Even without a full-on cyclone, heavy rains confine people to their homes. The North of Oman is full of low-lying parts between mountains and the sea so heavy rain causes huge floods and makes it unsafe to travel. In hurricane Gonu in 2007, people died trying to cross water-filled wadis. En sha Allah this time with such preparation and care no such tragedies will occur.
Posted by V at 11:02 PM