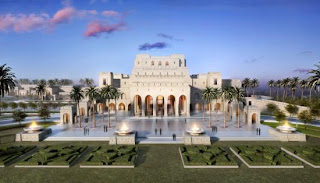 I felt it would be nice to begin my blog with the upcoming event I am most excited about in Muscat; the Royal Opera House, scheduled for completion next year. For those that don't know, it's the first Opera House in the Gulf region - and it's practically on my doorstep!! Construction has been going on since 2007 and as far as I can tell most of the building work is complete. It will be a cultural icon and a social hub (they are including in the project a souq with restaurants, shops, coffee shops and an art gallery).
As a lifelong ballet fanatic, I am most interested to know whether any ballets will be shown. I've read that they are intending to show dance so prospects are good. The Sultan has a passion for classical music (hence the commission of the Opera House), but I wonder whether he cares much for ballet. If they are intending to show ballet I hope they have a good advisor, perhaps someone with connections with certain Russian or European companies....
It will also be wonderful to watch operas and classical music concerts, and there has also been talk about some traditional Omani music and dance being performed, which I am so hoping there will be. Oman is extremely rich in performance arts but apparently there isn't a huge platform for traditional performers on a professional level. I have faith that the Opera House will show local performances as Omani culture is generally well upheld here as a source of pride and an attraction.
As far my cultural experience of Oman goes, the Royal Opera House will be the icing on the cake for me!
Posted by Victoria is my name, PR is my game! at 3:09 AM 5 comments: