There's no need for me to write a big article on the recent Wikileaks revelations of US diplomatic messages, when Muscat Confidential has done an excellent job here. I'll just mention some highlights which I found interesting.

Many world leaders haven't come off too well, although from what I've read I can't say much of it was shocking. Who knows why one of the stories most hitting the headlines is of a leak which mentions Libyan leader Gaddafi's relationship with his Ukranian nurse?! Exposed and embarrassed, the White House are condemning Wikileaks, one congressman even calling for it to be treated as a terrorist organisation!

Sultan Qaboos and Oman however have come off well. The Sultan's comments on international affairs such as Iraq and Iran show great wisdom and ration.

An excerpt in which he mentions women struck me the most; he said "Omani women were stuck in tradition and needed to be empowered to "take more charge" and to "be less shy". "Some customs (regarding women) shouldn't be kept".

The Sultan's views on the development of women are no secret; the progress he has pioneered says everything. The support and encouragement Omani women get is unique in this area of the world and its a great shame for any women who don't seize the opportunities given to them by this enlightened man.

Long live Sultan Qaboos and his Oman.
Posted by Victoria is my name, PR is my game! at 3:01 AM 3 comments:

More often than not these days, reading articles in the news about multi-faith communities gives me an uncomfortable feeling in the pit of my stomach. The one I read which prompted this post describes another protest against the proposed construction of a mosque in Tennessee, US. Okay, this area of America isn't exactly famed for its religious broadness, but I can't help but be shocked at the lack of tolerance these people are exhibiting. The story is that the community's group of Muslims has outgrown their current mosque in a small office building and has bought some land on which to build a new one. A few non-Muslim locals who have got carried away with the hype of anti-Islamic feeling have in their small minds turned what is a mosque-come-community-centre to serve the small local Muslim population into some sort of centre for global domination reminiscent of a comic book plotline.

The response to the mosque has included vandalism, construction equipment on-site being set alight and a lawsuit. Even a couple of authoritative figures (one wonders how they came to be such) have put in their two cents. A Republican candidate for Congress commented that she was "opposed to the idea of an Islamic training centre being built in our community". Yes, right alongside their Christian training centres (if thats what we're now calling them).

Whilst theological debate is healthy, it is being used as a cover for prejudice and oppression. Scarily its beginning to feel as though all of these efforts towards so-called 'freedom' and human rights have been a waste of time and that humans are in some ways regressing. I don't suppose any of them have read the Universal Declaration of Human Rights (major contributor: the United States) which permits every human to freedom of religion and "either alone or in community with others and in public or private, to manifest his religion or belief in teaching, practice, worship and observance". It shouldn't even need to be re-stated.

We can't just blame Americans, nor Christians for this transgression. The story is being repeated in many other parts of the world and among all religions. Egyptian authorities are currently in the news (again) for preventing the construction of churches, causing violent riots. In Syria too, the repression of Protestants and Evangelicals is being claimed as several buildings operating as churches have been closed down for not having licenses.

How, in our modern world of great scientific and technological advancement, is religion still causing such fear and fury?! At the moment Oman stands pretty well in terms of religious tolerance (at least officially). Lets just hope it doesn't get bitten by this dangerous bug.
Posted by Victoria is my name, PR is my game! at 10:52 AM 7 comments:

Meeting of the Monarchs

The long awaited visit from Queen Elizabeth and the Duke of Edinburgh is upon us, marking another step in the positive and longstanding relationship between Oman and the UK. The city is looking pretty slick since the preparations for the National Day and I've been marvelling at the pretty lights and flower displays. Included in the itinerary is the Royal Cavalry Show (unfortunately not open to the public, but I'm assuming will be aired on Oman TV) in which a few students from the British School have been invited to take part. Information surrounding the visit is on the British Embassy's website, ukinoman.fco.gov.uk/en (including an article mentioning the buzz the visit has caused on the Oman blogging scene).

I'm wondering what the meeting will be like, the two monarch's have such different roles in their respective countries. Whilst Queen Elizabeth does not rule her country and has no official political influence, Sultan Qaboos is an absolute monarch and the head of the government. Also, in Oman only males are entitled to the throne. It will be interesting if these come up in conversation between the two.

In a small tribute to the visit here are a few interesting facts you may or may not have known about the Queen and the Sultan.

1) The Queen's last visit to Oman was in 1979 and this month's visit will be her first to the Gulf since then. The Sultan's last State Visit to the UK was in 1982.

2) During her reign the Queen has made over 60 State visits to foreign governments.

3) The Sultan studied in England and graduated from The Royal Military Academy, Sandhurst.

5) The Queen's official birthday is not celebrated on the same day every year, the Sultan's is celebrated alongside the National Day on 18th November.

6) The Queen is head of State in 16 Commonwealth countries.

7) The Queen has been married for 63 years, the Sultan's brief marriage to his cousin ended in divorce.

8) Since 1800 the two countries have been tied by a Treaty which states that their friendship will "endure till the end of time". The Queen quoted the Treaty during the Sultan's visit to the UK in 1982.
Posted by Victoria is my name, PR is my game! at 12:31 PM 2 comments: 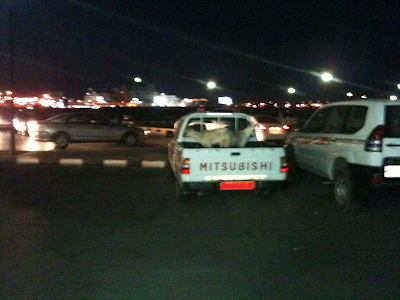 I couldn't help but laugh at this image in a supermarket car park this evening. Someone was obviously getting prepared for Eid. I guess they had to pop in for some marinade....
On that note, here's to a happy Eid! (although not so much for the goats)
Posted by Victoria is my name, PR is my game! at 10:44 AM 7 comments:

Yet another news article about the afflictions of migrant workers here in Oman. The Times of Oman has reported the story of 9 Indian workers who were tricked and "illegally recruited" at the hands of two agents in India. Once the workers reached Oman their passports were taken from them, they were forced to work long hours and were denied pay. Is this story beginning to sound all too familiar?
Human Trafficking is a global disease but due to the sheer volume of migrant workers and the relative youth of the system, it seems there are a lot of cases here.
According to a report on Human Trafficking in Oman by the UN Refugee Agency (UNHCR), although progress is continually being made, Oman is still not fully compliant with minimum global standards in trafficking. There was a Royal Decree issued in 2008 which can punish human trafficking with up to 15 years imprisonment and fines but what the system most prominently lacks are properly functioning procedures for victims of trafficking among those who are without identification (ie. those whose passport has been taken from them).
The implementation of laws and punishments is a huge step in the right direction but I think more should be done towards the prevention of expolitation. This should include assisting those who are most vulnerable (those who are poorly educated, or even illiterate, and those who do not speak Arabic or English). One way would to be to ensure that anyone entering Oman to work is informed in writing or verbally in their own language of their rights, the laws and where they can find support. Employers too should be given the same information so they are aware of the laws and what their rights and limits as employers are. Employment agencies could be controlled, or at least audited by the government (perhaps there is some sort of system in place already, if there is its evidently not fully effective).
Far from being exploited, migrant labour and domestic workers should be extolled because they have contributed so much to the development of Oman. I'm sure the majority of the Omani population do treat foreign workers with the respect and equality any human deserves, but whilst cases of abuse remain regular, its obvious there is still a long way to go.
Posted by Victoria is my name, PR is my game! at 8:34 AM 3 comments:

Last night I attended the latest in the line-up of comedic performances held at the Crowne Plaza, 'Ahmed Ahmed & Friends', (the friends being Angelo Tsarouchas, Sherif Azab and Erik Griffin). I'm not very familiar with the comic scene but evidently they are pretty famous. Ahmed Ahmed plugged a film he has brought out recently called 'Just Like Us', which was shown at the Tribeca Film Festival. Azab is more of an up-and-comer but Griffin and Tsarouchas are both rather well established.
I have to say, for me the show was a mixture of enjoyment and disappointment. They did all make me laugh. However Tsarouchas in particular, who although seemed popular with the audience, gave me the feeling that he was using old and repetitive material and that he hadn't made a lot of effort to prepare to perform in Oman. Surely it wouldn't take too much effort for a skilled comedian to do a little research on the place they are performing and find something to joke about, in order to relate more personally to the audience, which is apparently just what Moz Jobrani did in his performance at the same venue last year.
Apart from this one bone of contention though, they all made great jokes and managed to relate to a very mixed audience. For me Griffin was the highlight of the show and his clever impressions and sound effects had me doubled up with laughter.
Oh, and on a slightly unrelated (though still comic) note, I think Ahmed Ahmed looks like a young Alan Sugar (from the British "The Apprentice"). 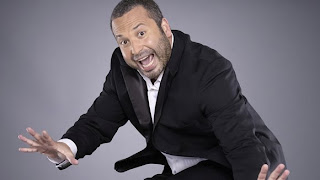